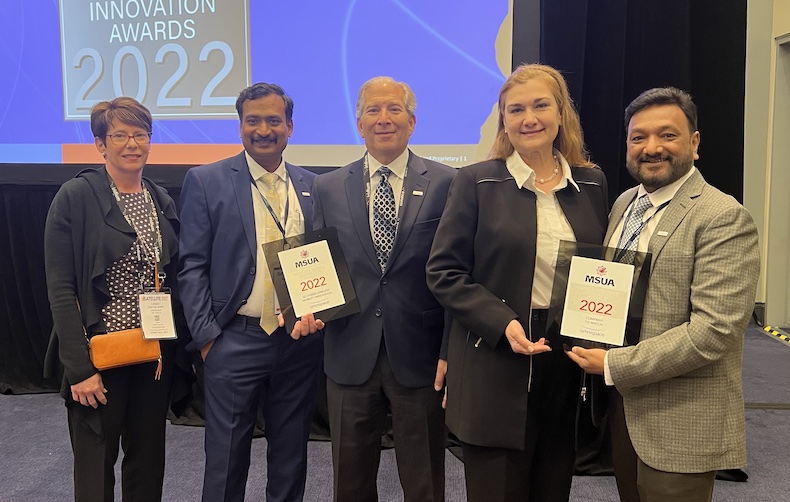 March, 28, 2022 – Mobile Satellite Users Association (MSUA), a global not-for-profit organization focused on amplifying the voice of satellite mobile services users and innovators, recognized Omnispace as both its “Company to Watch” and with its “5G Hybrid Wireless Mobility Innovation” award for 2022.

Omnispace is redefining mobile connectivity for the 21st century. By leveraging 5G technologies, the company is combining the global footprint of a non-geostationary satellite constellation with the mobile networks of the world’s leading telecom companies through a single, seamless network.

Omnispace is ramping up on the execution of the delivery of the world’s first global hybrid 5G network, combining the reach of a non-geostationary orbit satellite constellation with the capacity of the world’s leading mobile wireless carrier networks. Recently, the company announced a strategic cooperative agreement with Nelco Limited, a TATA Group company and a leading satellite communication service provider in India, to enable and distribute 5G non-terrestrial network (NTN), direct-to-device satellite services. The collaborative effort will expand the reach of 5G using satellite communication throughout India and South Asia. Omnispace also shared that it is teaming with TTP, an independent technology and product development company based in the UK, as it makes 5G non-terrestrial networks (NTN) a reality.

“As we celebrate 30 years of representing the interests of the millions of users of satellite mobile solutions and the service provider community, I am pleased to celebrate the best of the best in satellite mobile innovations. We received more nominations than ever before which highlights the impact the satellite industry is bringing to bare for connectivity and solutions at sea, on land, in the air and in orbit for a broad range of use cases,” says Lisa Dreher, president, MSUA.

The Omnispace global NGSO satellite network will utilize the company’s 2 GHz mobile satellite spectrum allocation and operate in the 3GPP band n256. The global 5G standards-based NTN will deliver global, seamless, 5G connectivity for a variety of applications including heavy equipment, connected vehicles, UAVs, and smart phones. As the world’s first 3GPP-compliant 5G NTN network, it will deliver the power of 5G connectivity to users and IoT devices anywhere on the globe.