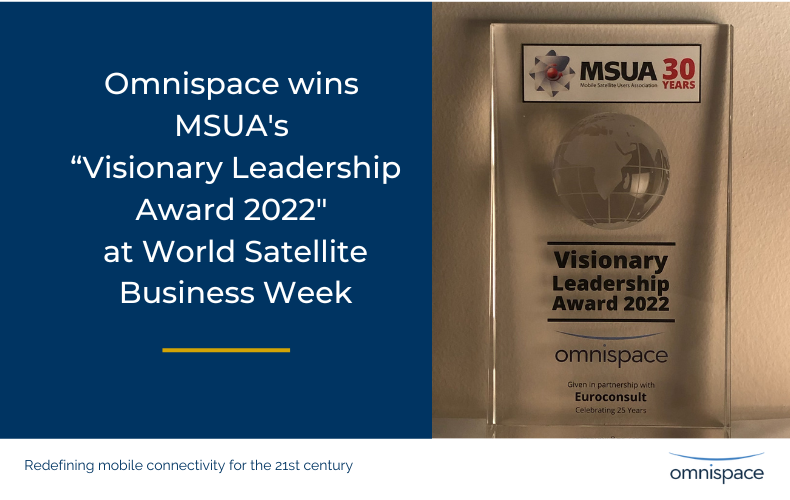 Company Recognized for its Game-Changing Leadership as it Pioneers New Category of Global, Mobile Communications

September 14, 2022 – Omnispace, the company redefining mobile connectivity, announced that the Mobile Satellite Users Association (MSUA), in partnership with Euroconsult, awarded it with a “Visionary Leadership Award.” Presented at World Satellite Business Week, the recognition is a testament to the leadership of the Omnispace team as the company continues its efforts to launch an entirely new category of global, mobile communications.

Since the company’s founding, Omnispace has been focused on a game-changing vision to extend mobile telecom’s reach to seamlessly deliver the power of a 5G, everywhere. The Omnispace network will combine the global footprint of a non-geostationary satellite (NGSO) constellation with the mobile networks of the world’s leading telecom companies.

Omnispace remains steadfast in a belief that the future of 5G communication is hybrid, and in its approach of leveraging universal mobile standards (3GPP) that will be adopted globally by mobile networks and devices for 5G.

As the world’s first 3GPP-compliant 5G non-terrestrial network (NTN), it will deliver the power of 5G connectivity to users and IoT devices anywhere on the globe. The Omnispace 5G NTN system, operating in low-earth orbit (LEO), will seamlessly integrate with terrestrial networks to deliver a ubiquitous connected experience.