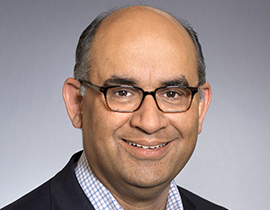 Ram Viswanathan brings decades of experience forging new frontiers in the telecommunications and satellite industries to Omnispace. As President and CEO, Ram sets the strategic direction for the development and delivery of the world’s first satellite and 5G-based ‘one global network.’

Previously, as CEO of Devas Multimedia, Ram pioneered the development of India’s satellite-terrestrial broadband internet and media services platform. Prior to that, he led the strategic partnerships as CSO and EVP of Business Development at Cidera. As WorldSpace’s SVP of Corporate Development, he helped formulated the successful U.S. joint venture, XM Satellite Radio.

At McKinsey & Company, Ram worked with U.S. and European telecommunications and technology clients and assisted in establishing its India consulting practice. He also held positions at Goldman Sachs & Company in investment banking, focusing on mergers and acquisitions.